Watford and Bournemouth were relegated from the Premier League on the final day of the season on Sunday.

Watford’s 3-2 defeat at Arsenal condemned them to 19th place, while third bottom Bournemouth’s 3-1 win at Everton wasn’t enough to save them.

Aston Villa’s 1-1 draw at West Ham ensured they stayed up at Bournemouth’s expense as Dean Smith’s fourth bottom side finished one point above the Cherries and Watford.

Manchester United and Chelsea sealed Champions League places on Sunday as Bournemouth and Watford fell through the trapdoor on a dramatic final day of the longest Premier League season.

Liverpool were crowned champions last month but there were many issues at stake in the final 90 minutes of a campaign that started on August 9 last year and was interrupted by a three-month coronavirus shutdown.

United finished third after a nervy 2-0 win in a Champions League shootout against Leicester while Chelsea ended in fourth spot after beating Wolves 2-0 thanks to two goals on the stroke of half-time.

Leicester, in fifth spot, will play in the Europa League next season where they will be joined by Tottenham, who drew 1-1 with Crystal Palace to leapfrog Wolves.

Mason Mount whipped in from a free-kick to give Chelsea the lead and the home side went further in front almost immediately, when Olivier Giroud slid home.

United, whose form has dipped in recent weeks after they pulled themselves back into contention for the Champions League, were locked at 0-0 at half-time at the King Power Stadium.

But they finally broke the deadlock in the 71st minute, when Bruno Fernandes scored from the penalty spot after Anthony Martial was upended. Jesse Lingard scored late to seal the win.

The result is a huge lift for Solskjaer, whose team slipped well off the pace earlier this season, but is a bitter blow for Brendan Rodgers’ Leicester, who have been camped in the top four for almost the whole campaign. 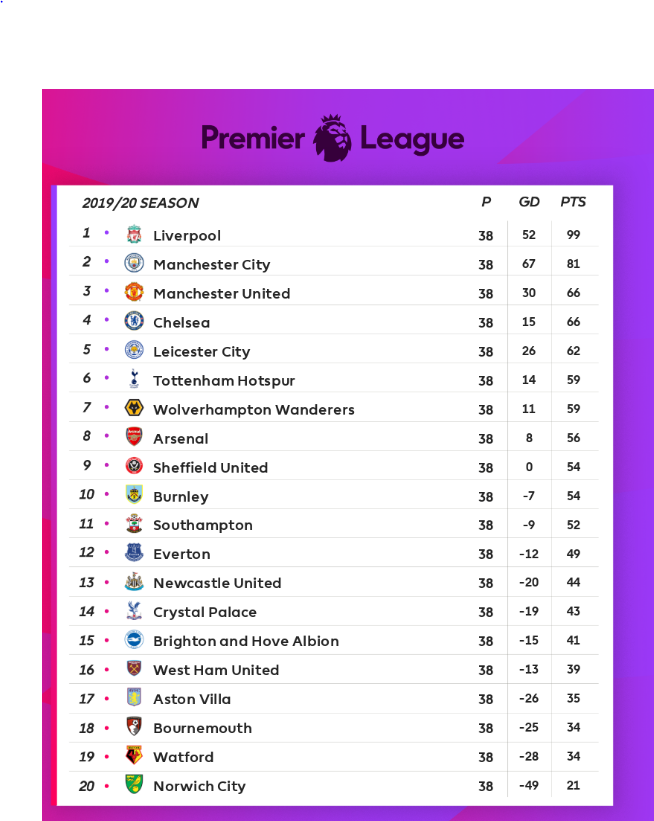 A graphic showing the EPL table after the end of the 2020/2021 season. Source: Premier League.– Top four qualify for Champions League